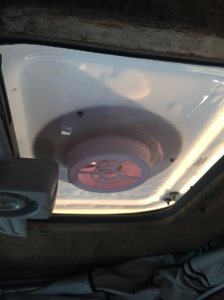 We’ve all woken up in the morning and noticed the air in the cabin of the van smells all fusty and stale, or opened the van after a period parked up and noticed the damp air smells. If only there was a way to recirculate the air automatically… well there is!

This solar fan has a self-contained solar panel which powers up the fan from first light and keeps running until the sun sets. Well at least that’s the idea.

The solar fan is fitted into a standard sized opaque skylight which is easily swapped for the standard one on a Westfalia roof. You will need to move the hinges and the locking mechanism across from your old skylight, but its all very easy. It then can be operated as a traditional skylight, allowing additional ventilation etc. if the fan isn’t shifting enough air. So far, so good. 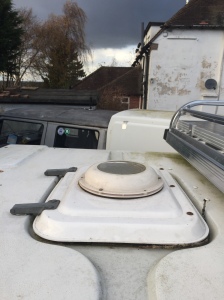 But, the system has it’s shortcomings. The fan is not overly powerful and doesn’t shift a lot of air, but that said its better than nothing. The biggest weakness is the solar cell, which doesn’t generate a lot of power and needs very bright sunshine to energise the fan motor enough to overcome the inertia in the fan unit. In the winter (when you want the fan to circulate the air), it barely runs as the Sun’s intensity isn’t enough to power the cell. Even on summer mornings, it sometimes needs a little push to get it spinning, which it then does without issue – it’s just getting it started. 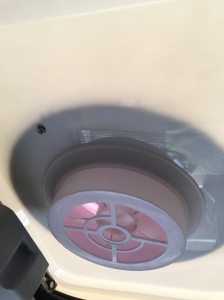 Sadly that’s not the end of the issues: I regularly found water on the floor underneath the skylight. First I replaced the seals on the skylight in case this was the issue. But that didn’t fix the problem. So I then opened up the housing after finding water on the fan cover and it was full of water. There were foam seals, but they weren’t keeping the water out. Time for the silicon sealant. The fan is now dry and the rain stays outside, but it does have condensation inside the Perspex window over the solar cell.

So, what next? I’m considering modifying the skylight, firstly looking to see if I can remove any of the friction in the fan assembly. Then I will look at a more efficient solar cell, or perhaps a bigger external panel on the roof. I am thinking that perhaps I can add a rechargeable battery to keep the fan running longer? 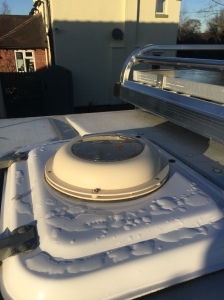 But if I didn’t already own the skylight, would I recommend it? Probably not, especially as it is now a lot more expensive than when I bought it at £100! The fan unit itself is available from eBay for just £29.

I am looking at more powerful 12v options for motorhomes, as these will allow me to switch on the fan when cooking at night and to use it in the winter.

Follow The Little Red Bus on WordPress.com
Join 181 other subscribers